No Content Available
With the Duke and Duchess of Cambridge enjoying a five-day tour of Pakistan this week, royal watchers have shifted their gaze to the region.
Bordered by China, Afghanistan, Iran and India — and with a population of more than 200 million people — it’s no surprise that Pakistan is a country of geographical and linguistic diversity.
However, there’s common ground to be found in Pakistan’s food.
Pakistanis are passionate about their cuisine, which is full of flavor and bursting with color. And they love to eat.
If the Duke and Duchess are lucky, they’ll get to sample a few of these popular dishes:

These easy-to-make crispy, fried fritters are a classic finger food served as a starter or a side dish.
Vegetables are thinly sliced before being soaked in a seasoned and spice gram flour batter and then fried for a few minutes.
Grab them while they are hot. If you prefer a meatier option, fish pakoras are also a favorite. 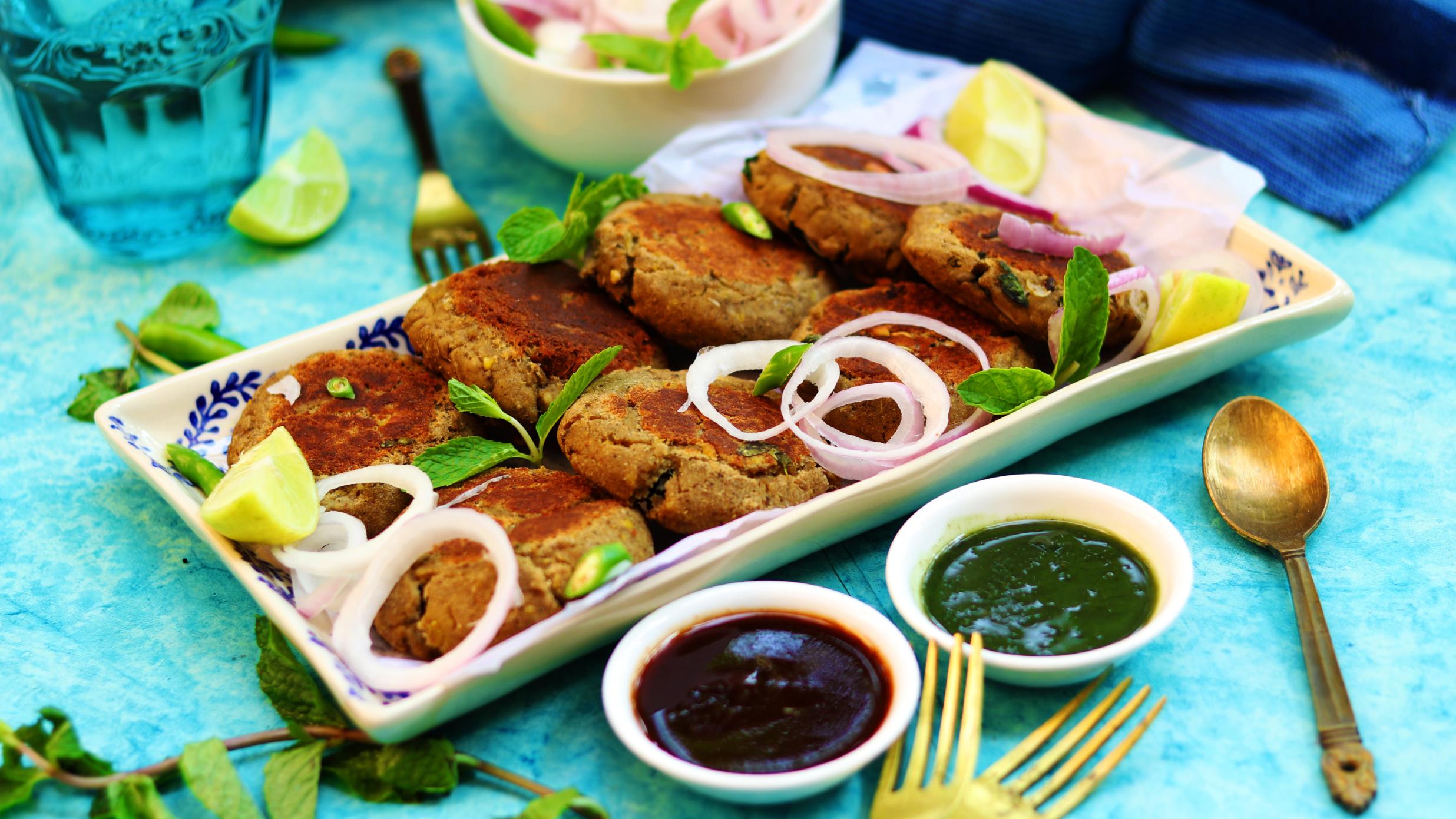 There are many different kinds of kebabs in Pakistani culture, including the shami kebab, pictured.
Shutterstock
Served as a snack or appetizer, there are many types of kebabs in Pakistani cuisine.
There’s the popular seekh kebab, which is ground meat grilled on skewers.
We also recommend the chapli kebab — so called because it is thought to be shaped like a chappal (sandal) — and the shami kebab, which features small patties made with minced meat mixed with split chickpeas, finely chopped onion, mint, green chilli and egg to hold it all together.

This popular street food was once sold by cart-pushing vendors who would sing out their presence while hawking their wares. While the advent of more snack food restaurants has made this less common, the popularity of the gol gappa has not waned.
The round shell is made with semolina and fried. Once it cools and becomes brittle, a hole is created and filled with a mixture of tamarind chutney, chilli, chaat masala, potato, onion and chickpeas. It is served with a bowl of spicy tamarind dip.

Thought to have developed in the royal kitchens of the 16th-19th century Mughal Empire, this rice dish is often served on special occasions.
It can be made with lamb or beef but chicken biryani is a favorite.
The meat and rice are cooked separately before being layered and cooked together with an assortment of spices.

Warm and comforting, this dish may look simple enough but a combination of lentils, wheat, barley and minced beef (or other preferred meat) are slow-cooked for hours in gentle spices.
The sticky consistency is achieved by constant stirring.

Paya literally translates to trotters and this warming goat curry, with a soup-like consistency, is often eaten on cold winter mornings.
Again, slow-cooking it will ensure that all the spices have infused into the perfectly tender meat.

This Pakistani favorite, often served to guests on special occasions, consists of slow-cooked lamb shank — including the bone marrow.
It used to be left to simmer and cook overnight to be served at sunrise.
These days, most people cook it for a few hours but the longer the better. 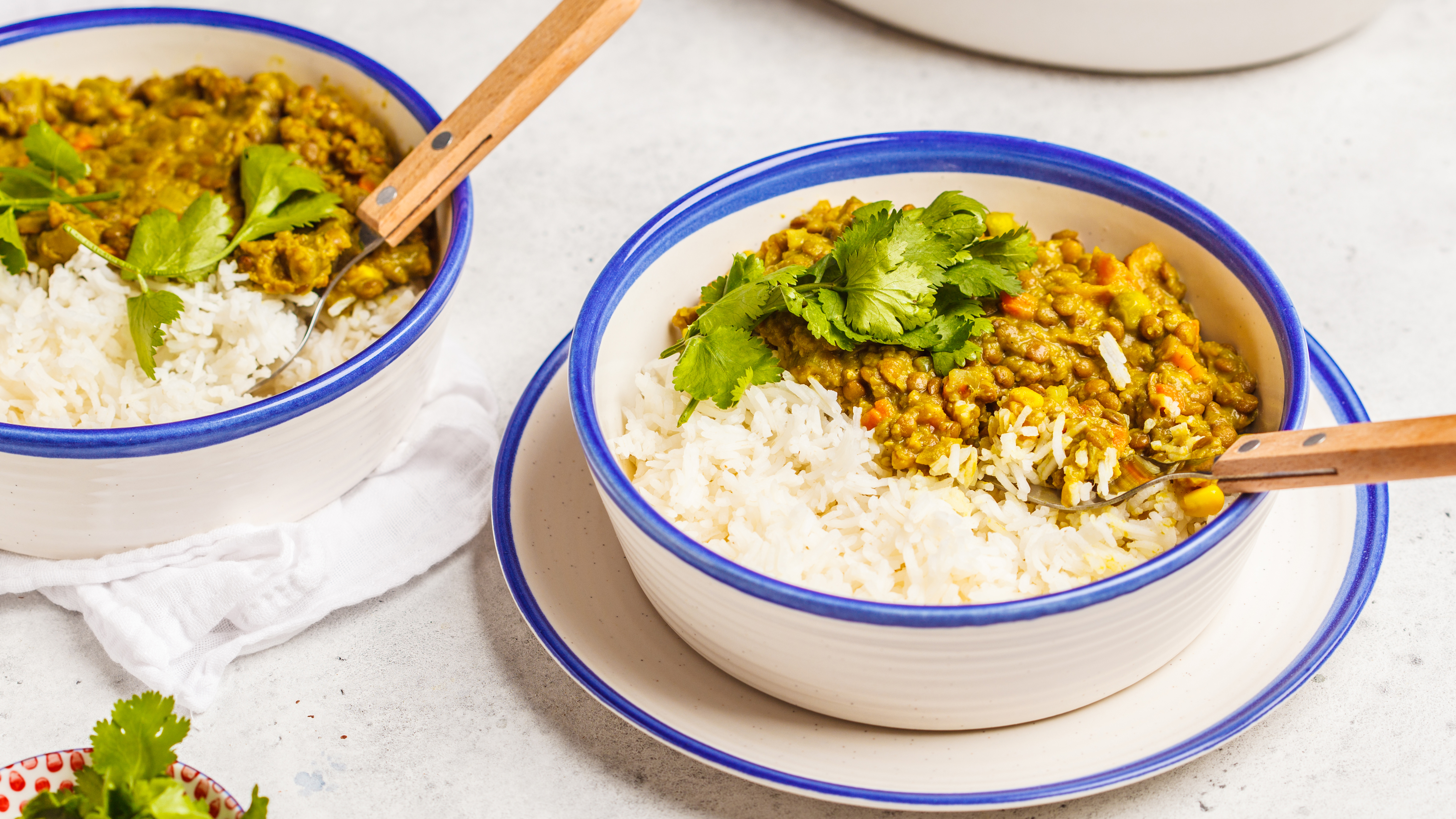 Tarka daal is a veggie delight.
Shutterstock
Pakistani cuisine may seem meat heavy but there are plenty of great vegetarian options. The word “tarka” refers to the process used when finishing off a lentil dish, so in essence tarka daal can be made with a number of different daals.
When the lentils are thoroughly cooked, the tarka is applied — onions, cumin seeds and crushed garlic cloves are fried until brown in a separate pan and added to the daal without stirring. It should make a sizzling sound as the tarka mixture hits the lentils.

Black eyed peas curry is healthy and tasty.
Shutterstock
Packed with protein and fiber, black eyed peas curry — lobia daal — is a particularly healthy option as well as a tasty one.
Peas are soaked overnight for best results and the curry is made with a tomato base.
It’s best eaten with roti (flatbread), in which case the curry sauce should be kept a little thicker, or with rice.

Bitter melon is thought to have a range of health benefits including purifying the blood, lowering blood sugar and boosting the immune system, which is why most Pakistanis have childhood memories of being persuaded to eat it by their parents despite its sour taste.
In Pakistan, it’s cooked with onions, red chili powder, turmeric, salt, coriander powder and a pinch of cumin seeds.

Eggplant curry is so simple and quick to make.
A masala base is created by frying onions, garlic and ginger, mixing in chilli powder, salt, turmeric and cumin seeds. Chopped eggplant is then added, potatoes too if wanted, and water before the concoction is left to cook for 15-20 minutes.
Roasting the eggplant in the oven beforehand gives the dish a smoky flavor.

This clarified butter flatbread is indulgent and tasty.
Shutterstock
Pakistanis make a range of perfect melt-in-your-mouth flatbreads including roti and naans but the paratha, made with clarified butter is a particularly delicious indulgence.
Eaten for breakfast, you can go for the plain option but there are also various fillings to choose from including mincemeat, potato or the mooli paratha — made with a radish filling.

A carrot-based dessert that you’ll often find at weddings.
Shutterstock
Also known as gajar ka halwa, this dish is made using a combination of grated carrots, nuts, milk, sugar and clarified butter.
Best served with a scoop of ice cream on the side, this flavorful but light dessert often makes an appearance at weddings and parties.

A brightly colored sweet rice that’s a Pakistani favorite.
Shutterstock
Traditionally served on special occasions, this brightly colored sweet rice is a Pakistani favorite.
Made with sugar, milk, food coloring and flavored with cardamoms, raisins, pistachios and almonds, zarda is either yellow or made with various food colorings to give it a multicolor effect.

Thick and creamy rice pudding, infused with cardamom.
Shutterstock
Keer is another dessert eaten at weddings or on celebratory occasions such as Eid al Fitr, the end of the Muslim fasting month of Ramadan.
This is a thick and creamy rice pudding-type dish is slow-cooked using milk, rice, sugar and infused with cardamom.
It’s topped with crushed pistachios and tastes equally delicious whether eaten hot or cold.

This meal is often eaten on Eid morning.
Shutterstock
A breakfast of champions, this combination of a poori (deep-fried bread), which is light and fluffy, is served with the rich tasting halwa (made with wheat semolina, sugar and butter) and channa (a chickpea curry).
It’s often consumed on Eid morning but can also be found as a street food breakfast or brunch option.

A refreshing dessert that’s perfect in the summer.
Shutterstock
In the intense heat of summer, this refreshing dessert is a popular choice. An unusual concoction made with an array of ingredients including milk, rose syrup, ice-cream and jelly, it also contains vermicelli and basil seeds.
It is thought the basil seeds have a cooling effect on the body.

Pink tea, also known as Kashmiri tea, is a traditional beverage made with tea leaves, salt, milk and a pinch of baking soda to give it its distinctive pastel color.
Often, it’s topped with crushed pistachios and served with nuts and dried fruit.

This dessert masquerading as a drink offers the perfect excuse to put several away during a meal.
Lassi is yoghurt-based and can come in a variety of flavors, but there’s nothing quite as refreshing as a cold mango lassi on a hot day.
Source :